Yesterday was the 11th Annual No Pants Subway Ride in NYC. After attending the Chocolate Sauce Books launch party some friends and I walked over to Union Square for dinner, and there were quite a few people walking around without pants as if it was an everyday occurrence. Restaurants were even accommodating.  Were you brave enough to got pant-less in the middle of January?

“The No Pants subway ride is an annual event staged by Improv Everywhere every January in NYC. The mission started as a small prank with seven guys, and has now grown  into an international celebration of silliness with dozens of cities around the world participating each year. The idea behind No Pants is simple: Random passengers board a subway car at separate stops in the middle of winter without pants. The participants do not behave as if they know each other, and they all wear winter coats, hats, scarves, and gloves. The unusual thing is their lack of pants.” – Improve Everywhere 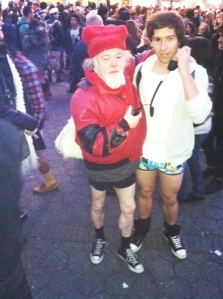