This is the time of the year for family gatherings. It’s the time of year when people think about the things they are thankful for and they take more time to volunteer; helping those that are less fortunate and those that can’t be with their families. NYC has a wide variety of organizations to volunteer your time to help others and your community. I’ve been doing some research on places that I’d like to volunteer and I came up with this list so far:

For the most part its seems as though you need to fill out an application and attend an orientation to get started as a volunteer. I’m looking forward to helping out in the community and I’ll keep you posted on how it goes. Do you volunteer anywhere or have any other recommendations?

Yesterday, two 45lb turkeys from Minnesota, Liberty and Peace, received a presidential Thanksgiving Pardon from President Obama. Liberty is the official national Thanksgiving turkey, and Peace is the alternate in case Liberty is unable to perform is duties. It’s uncertain when the tradition of pardoning a turkey for Thanksgiving began. Some think it all started with President Truman in 1947, but the Truman Library has not been able to find any evidence of this. In 1989, President George H.W. Bush officially pardon a turkey for the first time, and the tradition has since remained. In previous years the turkeys have retired at in Virgina and Frontierland at Disneyland. This year, the turkeys will retired to the historic home of George Washington in Mount Vernon, VA.

Will you be serving turkey for Thanksgiving this year? What are your family traditions? I grew up eating a southern style Thanksgiving dinner. My grandmother and mother make turkey, ham, baked macaroni and cheese, collard greens, cornbread dressing (stuffing), candied yams, and rolls. And for dessert we’d have sweet potato pie. I usually do a lot of the prep work the day before Thanksgiving, but this year I finished cooking my Thanksgiving meal on Tuesday because I have to work today. I don’t eat turkey or ham, so usually I just eat the sides and desserts on Thanksgiving, but this year I decided to do something different and I bought a tofurky.

It came with a stuff tofu roast and “giblet” gravy. I did a simple sauce of veggie broth and cranberry sauce and cooked in the crock pot, and it turned out great! I’ve been reading some other ideas online and I can’t wait to try a different way to prepare it for Christmas dinner.

One of my favorite things about Thanksgiving, aside from all of the yummy food, is watching the Macy’s Thanksgiving Day Parade. Growing up we’d always watch the parade on TV while helping mom in the kitchen, and since I moved to NYC I’ve actually gone to the parade for the past two years. Things can get a little crazy, but its fun watching the balloons and listening to the bands play. I never seemed to get there early enough to get a spot in the front, but the real stars of the show are the balloons. And you don’t need to get a spot up front to seem them because they are huge! The parade is a symbol of the start of the Holiday Season and ends with santa riding into town. 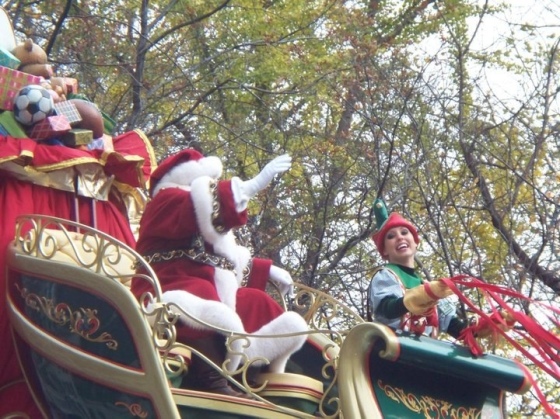 I hope that you have a Happy Thanksgiving and that you are able to spend it with family and friends.